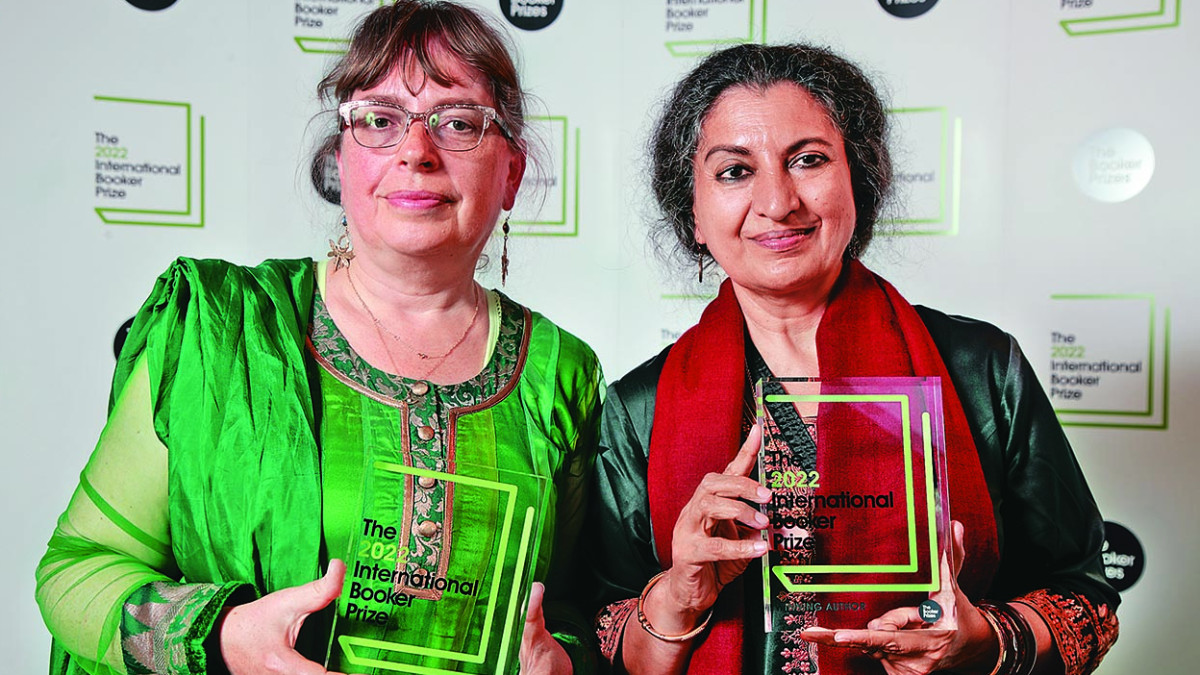 translator, translator. “The translator is the traitor”, they say in Italian. Such was the distrust and paranoia in Europe of translations that the learned linguist William Tyndale was executed in 1536 for “heresy” he had committed in translating the New Testament into English. The sacred could not be converted into an inferior language. A decade later, legendary French translator Etienne Dolet was executed for what they believed was a mistranslation of Plato and all of his works were burned with him. Five centuries later, an Indian author has won a major literary prize and shared it with her American translator, making it a good opportunity to discuss the status of translation in world literature and the role translations play in the canonization of a text, as well as becoming a cultural mediator between the two languages.

On the surface, translations help spread knowledge from one language to another. They enrich the target language and allow the source language to reach a wider audience. But which works are translated, into which languages ​​and from which pen are the questions that play a decisive role in the development of the text. A translation into a politically and economically weaker language will not help the text as a translation into a language of power does. A translation of an English novel into Hindi or Marathi will bring it to speakers of those languages, but the original novel needs no validation or critical acclaim, let alone an international award for those languages. While translating a Hindi novel into French and publishing it in Paris, or translating it into English and publishing it in the UK catapults it onto the world stage. We can blame ourselves, but it is the reality. Before Geetanjali Shree’s English translation Ret Samadhi published in the United Kingdom, its French translation, Beyond the Borderhad been published in Paris and had received a grand prize.

Pascale Casanova in her flagship work, The World Republic of Letters, vividly tells how Paris was crowned literary capital of the world and how French translations gave writers a new identity. Take James Joyce’s influential French translator, Valery Larbaud, who “succeeded in saving him from an invincible provincialism” and universalized the Dublin chronicler. Even Latin American writers have entered the international literary circuit mainly through their translation into French and their recognition by French critics.

Long before translations became a tool for disseminating literature, they helped spread religions to different and distant shores. It was the great Buddhist scholar Kumarajiva who translated several Buddhist scriptures from Sanskrit into Chinese and played a singular role in spreading the religion and its philosophy in China and East Asia. After initial apprehensions, the Bible ended up being translated into some 2,400 languages ​​and became an integral part of the Western conquest of Asia, Africa and South America. Today it is the most translated text in the history of mankind. In his test, translate the sacred, Robert Barnes points out that this was made possible “primarily because Christians believe that the message of the Bible can be presented in any language”. While the Quran has also been translated into many languages, “Muslims view these translations as mere aids in understanding the original Arabic, which is the only text considered inspired.”

What was the situation in India? Indians effortlessly translate their religious texts into several languages ​​spoken across the country. The many Ramayanas and Mahabharatas written in several Indian languages ​​over the past two millennia have been marked by endless variations. Not only was there not a single holy book, but there was also no singular version of religious texts. During the time when European scholars were being executed for rendering the sacred word in inferior languages, Tulsidas deliberately rejected the “language of God”, Sanskrit, and chose regional Awadhi to write. Ramcharitmanas, a text that quickly reached millions of homes in northern India. Mughal rulers commissioned the translations of a range of Sanskrit texts into Persian. Akbar even established Maktab Khana, the House of Translations, in which he invited a series of translators and illustrators to translate Sanskrit texts into Persian.

However, while the Mughal exercise was deliberate translation, a fixed and certain text, the others were narratives, essentially variations on existing tales. “Despite the presence of many languages, there was no ‘translation’ in the Western sense in India during the first 3,000 years of its literary history, until the colonial impact in the 19th century. It was for the good reason that literary production in India was seen as a collaborative and collective activity with little value placed on individuality or originality,” says literary scholar Harish Trivedi.

To find out how the tradition is still carried on, you can visit the Vaishnavite monastery, Auniati Satra, in Majuli, the great river island of Brahmaputra. Here the monks study and work on ancient texts and manuscripts. A plaque at the monastery has a Sanskrit shloka inscribed in the Assamese language: “All that I write may be wrong for even Bhima has been defeated in a battle.” The shloka appears at the end of several Sanskrit texts as an apology for the anonymous copyist, a humble admission of his fallibility that he might have made several errors in copying and thus deviated from the “original” text. This explained why there was rarely a single version of several ancient and medieval texts, which were passed down from generation to generation by assiduous copiers, and even the greatest copier could not easily have offered a “true” fac -similar. But the shloka could also be a narrative device to add a layer of ambiguity to the text and complicate its reading and its receptions, and it could also reflect the desire of the anonymous copyist to leave his fingerprints on the text. Several centuries later, Umberto Eco’s narrator in The name of the rose inserted a similar admission into the foreword of the manuscript he had found and later copied.

Before Geetanjali Shree’s English translation Ret Samadhi appeared in the United Kingdom, its French translation had been published in Paris.

Also, there are several words in Indian languages ​​to translate, and several languages ​​have more than one word, used quite interchangeably, which in a way reflects the composite literature and philosophy of the nation, unlike English where the word translation seems to have no synonym. The Indian stories can best be explained through the example of Tulsidas who claimed at the beginning of the Ramcharitmanas that he composed this text “for his own pleasure”. This contrasts sharply with, says Trivedi, “the translations of the Bible into the many languages ​​of the world which have almost all been undertaken to serve the larger God-ordained mission of converting the pagans.”

Translations also shape an author’s afterlife and help create a cult following, Franz Kafka being the greatest example. And the translations also allow the translator to understand the nuances of both languages. A translator often undertakes a long and excruciating search for a precise word that captures the sentiment well in the source language. French novelist Gustave Flaubert wrote of his long struggle to find the right word for the emotion bubbling within him. A translator’s struggle is perhaps more difficult. A shiny word is in front of you but you cannot find its exact replica. You ask friends, check dictionaries, but that word doesn’t exist, then you make one up before exploding with joy.

The first text I translated was Kafka’s short story hunger artist. It was at the suggestion of my editor friend Piyush Daiya who rejected my first short story, saying that I should try translations first to learn the “music of words”. In my early twenties, I spent a full year translating various texts, ranging from essays by modern artists, musicologists to a long excerpt from Ramchandra Gandhi Svaraja meditation from a book on Tyeb Mehta’s painting Shantiniketan Triptych. Some writers regularly engage in translations in order to have an intense duel with languages. This makes them aware of the hidden sounds and alphabets of their own language, otherwise one is prone to blunder; none greater than the person who published Chekhov’s masterpiece The lady with the dog in hindi like Kutte Wali Mahila.

Mughal rulers commissioned translations of a range of Sanskrit texts into Persian. Akbar even created Maktab Khana, the House of Translations.

We can end with the hope and excitement that the International Booker has brought to India. It is said that the award will open a global window to books in Hindi, as well as Indian languages. Pray for this, but note that Rabindranath Tagore lived for three decades after receiving the Nobel Prize. He was an imposing novelist, poet, musicologist, painter, thinker, public intellectual, a leading figure in the freedom movement. He was friends with some of the most powerful Indians and had a considerable worldwide following. And yet, the Nobel could only ensure that his Bengali language had little place on the world stage. The next Bengali text that received wide recognition in the West came several decades later – the short story by Mahasweta Devi Draupadi, which might not have been possible without the signing of Gayatri Chakravorty Spivak, a towering presence in the western academy. Spivak, who also returned Derrida’s book Of Grammatology in English, translated and taken Draupadi to the world. The other Bengali novelist, Amitav Ghosh, present all over the world, chose English as his creative language.

Before reaching the world podium, Hindi faces a continuous struggle with various Indian languages, in addition to the powerful obstacle of English Indian writers, who seem rarely willing to offer a place for Indian languages. In 1997 Salman Rushdie co-edited a “definitive” and influential volume of Indian writing since independence. With the exception of a short story by Satyajit Ray and Manto, all the works were by English Indian writers. Languages ​​other than English, used by more than a billion people, took up 22 out of 600 pages, or 3.6% of the book. Twenty-five years later, as we celebrate Geetanjali’s award, a 908-page tome celebrating Indian poetry has appeared. Not a single poet of any Indian language in this pompously titled book The Penguin Book of Indian Poets.

(This appeared in the print edition as “Art of the Traitor”)