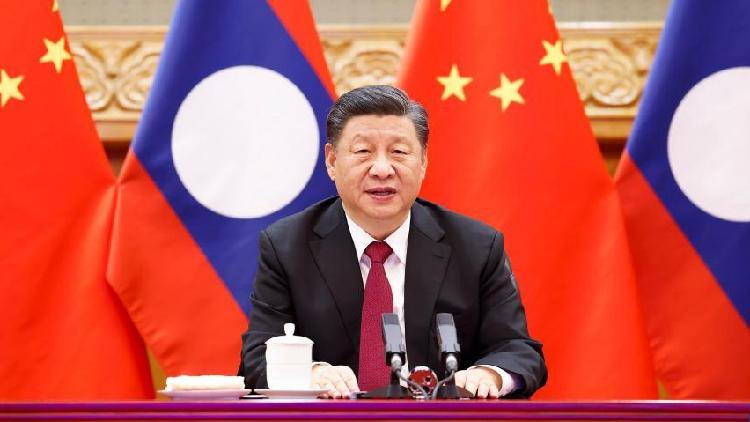 Xi noted that this year marks the 60th anniversary of the establishment of Sino-Laos diplomatic relations and is also the year of Sino-Laos friendship. Bilateral relations have withstood the test of changes in the international situation over the past 60 years, Xi said. The key to the two countries’ close ties is their adherence to common ideals, mutual trust and a willingness to help and support each other through thick and thin, he said.

China stands ready to strengthen strategic communication with Laos, promote the high-quality development of the Belt and Road Initiative (BRI) and build an unwavering community with a shared future between the two countries, said he declared to Thongloun.

The 1,035-kilometer-long railway, connecting Kunming, in southwest China’s Yunnan province to the Laotian capital of Vientiane, is a mooring project between the BRI proposed by China and the Strategy of Laos aiming to convert from a landlocked country to a land hub.

Construction of the project started in December 2016. The electrified passenger and freight railway is constructed with full application of Chinese management and technical standards.

With the official opening of the railway, a train leaving Kunming in the morning will arrive in Vientiane on the evening of the same day, according to China State Railway Group Co., Ltd.

China-Laos Railway: A Railway of Friendship, Cooperation and Prosperity

Proposed by the Chinese President in 2013, the BRI comprises the Silk Road Economic Belt and the 21st Century Maritime Silk Road, aiming to build trade and infrastructure networks linking Asia to Europe and to Africa along and beyond the ancient Silk Road routes.

In recent years, China has followed a high-level, sustainable and people-centered approach to promote the high-quality development of the Initiative, achieving mutually beneficial and win-win results among the countries concerned, said Mr. Xi.

With the opening of the railway, Laos’ dream of becoming a land hub will be realized, he said, calling for joint efforts to build an economic belt along the railway characterized by high quality. , sustainability and improvement of people’s livelihoods.

Thongloun said he was proud of the opening of the railway, which he hailed as “a dream come true” for the Lao people. With help from China, Laos eventually became the owner of a modernized railway, he said.

The railway is a “link” that strengthens the alignment of Laos ‘strategy to convert from a landlocked country to a land hub with the BRI and an important step for Laos’ efforts to modernize its infrastructure, a- he declared. This will significantly boost the economic and social development of the country, he added.